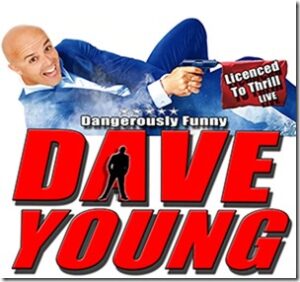 Regarded as one of the funniest comedians of his generation &

This is his most hilarious show to date, including a blend of side-splitting stand-up, impressions with laughs galore and there’s even a funny song or two!

Expect the unexpected cause with Dave Young’s unique comedy style anything can happen!

This fun-packed show is available for 30mins to 60mins, and why not have some fun with your boss, fellow employee, or loved one with his uproarious This is your life routine, that will have them rolling with laughter at themselves!

Honored with numerous industry accolades including the ‘Performing Arts Award for Outstanding Contribution to Comedy’ & winner of Best live comedian 2019. Dave Young regularly appears on The Late Late Show and The Saturday Night Show as well as appearing on numerous television shows on RTE, Virgin One, and Channel 4 His ‘‘Virtually Hilarious’ show ‘certainly shows Dave at his funniest and always controversial best!

Dave Young is an Irish comedian. He gained notoriety for having one of the craziest comedy shows in the country and has been honored with numerous industry accolades including the PERFORMING ARTS AWARD for OUTSTANDING CONTRIBUTION TO THE ARTS.The Irish Independent has called him “flat-out hilarious”, America Today has called him “thrilling to watch”. His fans range from Billy Connolly to Joan Rivers. But stand-up comedy is only one of the many sides to this naturally funny man.

Due to phenomenal demand, you can have the hilarious Dave Young at your event. Have a great night of entertainment on your special day: refreshing, hilarious, and totally different. Make your event a day that no one will forget with the most popular comedian in Ireland.

Dave Young makes your event extra special by bringing your guests together with side-splitting laughter, and hilarious audience participation. Watch out, you might see someone you know performing and participating in some crazy routines as well.

People will talk about the best event ever, so make it happen with Dave Young and dare to be different. The show is tailored to suit your needs and is completely personalized so there’s nothing better than hearing all the funny stuff about your guests and wondering how does Dave know it?

From the time I spoke to him to the performance, he had me in stitches. A down to earth guy that has the Irish humor down to a T and knows how to entertain any crowd. I saw fully-grown men cry with laughter, he truly is the best comedian of his time. Made our event far from “ordinary, tour de force”

Dave made our event one to remember. He is just what’s needed to get the energy going after a big meal. He made the atmosphere for the whole night, put everyone in great form, and made our cheeks hurt with the laughter. Definitely recommend him to make your event one that will be talked about for years to come

Awesome, Dave Young made me feel so welcome at RTE studios I’m still laughing and man, he can hold a tune too! Later dude!

I’ve been to many weddings where they have had wedding comedians and the majority of them just die on the stage and there is nothing worse! So, there is only one guy I know that’s able to deliver time and time again… that’s Dave Young – Superb

It was great sharing the stage with Dave at Ashford Castle, he had the guests and ourselves in stitches!

The funniest comedian I have ever seen, Dave had us laughing all night, he made our show.

“Dave recently performed at our Corporate event… At first, I was very hesitant about booking a Comedy act, I carefully asked around for someone with great interaction who could captivate and hold an audience. When 9 in 10 people recommended Dave Young I looked into his portfolio. I booked him within 5minutes and It was the best investment of the whole day. He really delivered from start to finish. As a tour manager, I would highly recommend booking Dave for any events but do so soon as I predict he will be selling out arenas by 2025. We wish him every success on his journey and hope to work with him in the near future.

“Professional and very very funny are just two ways of describing Dave Young and we are proud to award Dave the winner of The Best Entertainer. We sincerely congratulate Dave and wish him the very best for the future.”

His first big break came at the age of sixteen when he played the role of a young Al Jolson at Dublin’s Olympia Theatre, where he was selected from hundreds of audition hopefuls. The show was a resounding success and the start of many stages and TV appearances throughout Europe. During his late teens, he formed his own band and played the local pubs and clubs of the capital where he featured as the lead singer. It soon emerged that he had a unique talent for making people laugh, which led to him going solo with his own brand of zany comedy.

While touring with his show he also appeared in TV programmers “The Beat Box”, “Ballykissangel” ,”Upwardly Mobile “and “Faircity” with parts in movies and Tv serious “Young Indiana Jones” “Gone with the wind”, “The Commitments”, “The Van”, “The Snapper”, “Braveheart” ,”Michael Collins”, “Space Truckers “and he got to play one of his idols Billy Connelly in the movie “When Harvey met Bob”.

He brought a national news campaign called “Chill-Blaine’s” to raise awareness and funding for the plight of Ireland’s homeless community. As a parody to Magicians David Blaine’s 44 days of starvation and deprivation in a glass box over the River Thames, he was suspended for 44 hours over Dublin’s river Liffey in his own glass box full of luxuries and meals delivered by silver service waiters. He is now the charities leading celebrity patron and recently brought in over EUR50,000 from telephone voting when he appeared in the popular RTE Television series “Celebrity ICA Bootcamp” where he made it to the final. Raising money for the homeless is very close to his heart as he says “we are all only a few paychecks away from being homeless, so never judge anyone you see on the street”

Other stages and theatre roles have seen him star as Fagan in Oliver at the Tivoli Theatre and he also appeared in the “Rat Pack” as Frank Sinatra which played in the Olympia Theatre, Dublin, and also theatres in Cork and Belfast. He was a special guest star at the Meteor International Music Awards Dublin’s O2 alongside Amy Winehouse, Westlife, Ronan Keating, The Kaiser Chiefs, and Pussycat Dolls. He is also an accomplished presenter where he works on the Corporate Event scene and has played host to Jack Charlton, President Mary Mcaleese, and Michael Flatly to name but a few. He appears annually as a Special Guest Star at the hugely successful “Marbella Ball” in Spain and has his own weekly radio show there on Octopus Radio 98.3FM.

He is touring internationally, his hilarious and outrageous show as well as appearing on and keeping audiences entertained for RTE”s “Late, Late Show”, “The Miriam Show” and “The Saturday Night Show”.

His Discography includes; “Seriously Frank” a tribute album to Frank Sinatra & “Shush while I swing” a compilation of his favourite hits with a comedy twist. His DVD releases are “Dave Young Live”, “Dave Young All Hushed Up”, “Dave Young Up till Now!” ,”Dave Young No Cutbacks on laughter!” and” Dave Young Seriously Funny”

Dave Young also performs at Weddings, and has won Wedding Comedian of the year for the last six years. Currently during the Covid Pandemic Dave Young is keeping audiences going with his Virtual shows online from his studio, with Comedy, MCing events, Quizzes and Magic. To book hilarious comedian Dave Young for your next memorable party simply call +353 1 201 3660 or email info@audionetworks.ie.