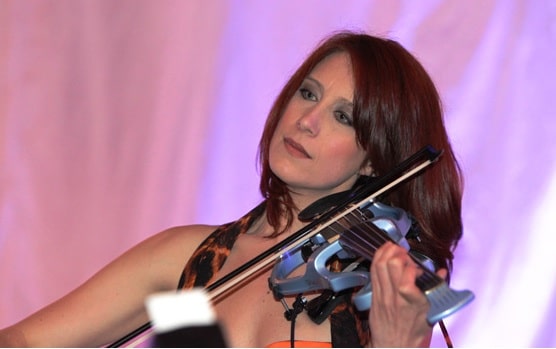 Audionetworks Irish Violinist is one of those rare violinists who shines with versatility. Although originally from a classical background, she is equally at home in a multitude of genres from trad, jazz, rock, pop, and traditional Celtic music to Broadway shows and experimental theatre pieces. She credits her broad range of technique to her years spent studying with the international concert violinist Benny Kim, time at Berklee College of Music, and the diversity demanded of a freelancing musician in New York City.

Since 2007, she has been dividing her time between Ireland and the States. In addition to working extensively as a soloist, she is also the lead violinist with both the Three Irish Tenors and Druid. She has toured throughout Ireland, the UK, Holland, North America, and the Caribbean, and has performed with Disney’s “The Lion King,” Rod Stewart and Mannheim Steamroller. In the past few months alone, she has performed as a featured guest at over 80 corporate and private events, including the American Ireland Funds, Renault, Failte Ireland, the Shelbourne Hotel in Dublin, and the Ritz Carlton in County Wicklow.

To book our Irish Violinist for your wedding Music or next corporate event entertainment call +353 1 201 3660 and speak to our team at Audionetworks.