Rhythm of the Dance

This incredible live show creates a new era in Irish entertainment, containing a wealth of Irish talent, featuring World and Irish champion dancers, some of the finest Traditional musicians and singers who are a big hit everywhere. Combining traditional dance and music with the most up to date stage technology, this two-hour dance and music extravaganza takes the audiences on an exhilarating and exciting, energy-packed time trip through the ages. It’s internationally rated as one of the most popular and busiest Irish step dance shows in the world making it such a success with critics and audiences worldwide. Be sure to share the experience when it comes to a venue near you. You’ll be very glad you did. It really is out of this world as seen by 7 million people in 50 countries.

Rhythm of the Dance – Testimonials

China Shenzhen:
China Shenzhen City Eve of the new Millennium EARTH DOME, with a live audience the show was beamed to over 750 million viewers on syndicated National Television.
France :
Introducing Irelands newest, most exciting act for Festivals, Nightclubs, Corporate Events or Private Parties. Looking for something completely different and unique? Audio Networks have discovered the perfect act for you as seen in France, Paris 2003 Palais de Congress sold out for Rhythm of the Dance.
.
Poland 2001:
Voted Best Irish Dance Show, presentation of the award to Kieran Cavanagh Director/Producer ROTD was made by actors Stephanie Powers (Hart to Hart) and Michael York.

With a wonderful, gifted young cast of dancers, musicians, and singers, featuring live performances from the entire troupe, this is a show that has won critical acclaim across 4 continents of the world in 50 countries to over 7 million fans. And now after 20 Years of showcasing the very best in Irish dance to the world, the show has undergone a process of renewal, reinvigorating the choreography and music to create an even more spectacular performance. Producer Kieran Cavanagh is very excited about the updated format of the show, he hopes that Rhythm of the Dance will be a breath of fresh air into Irish dance with this traditionally rooted and authentic production.

Greece 2004 By invitation of the Greek Government Rhythm of the Dance performed in the Acropolis, Athens to an audience of 5,000 people.

Dollywood, Tennessee, USA 2007, 2008, and 2015 Rhythm of the Dance were honored with full houses for the entire run in Dolly Parton’s theme park.   But the day in 2007 that Dolly and Rhythm of the Dance performed together to an invited audience of 1,000 media journalists was the most memorable event of our stay.   Dolly sang “When Irish Eyes Are Smiling” with Rhythm of the Dance’s own 3 Irish tenors and along with Rhythm’s cast of dancers Dolly performed a rousing version of her own composition“We Irish”. It brought the house down!

10TH Anniversary World Tour. 2009-2010 2009 began the 10th-anniversary world tour of Rhythm of the Dance, playing over 250 venues in 17 countries, meeting with high praise from fans and supporters at every stop along the way.
 

Rhythm of the Dance sells out the Great Hall of the People in Beijing.  It was a massive honour to be allowed to play this historic and symbolic venue, and a massive delight to have entertained and enthralled the capacity audience.
15TH Anniversary World Tour. 2014-2015 Rhythm of the Dance embarked on an expansive tour to celebrate the 15th year of performing our show, playing to packed houses and delighted audiences across North America and Eu
Closing Ceremony of inaugural European Games in Azerbaijan.  Rhythm of the Dance had the great honor to perform at the closing ceremony of the first-ever European Summer Games in Baku Azerbaijan 2015.

Rhythm of the Dance – Setlists

Newgrange at Dawn
The show begins in Newgrange, one of Ireland’s natural wonders. A haunting voice calls out, beckoning the cast to emerge on stage, standing strong, awaiting the sun to rise and bring life. The dance builds in layers of different rhythms until the full troupe is dancing together in powerful synchronization, joined by the band in celebration, we are the people of Ireland..

Celtic Air
A lonesome whistle plays, although we stand strong today, our journey has been long, follow us back across the ocean to where it all began.

The Plight of the Irish
This piece displays the female soft shoe dance called a Slip Jig, it is danced with grace, like a swan. As the female troupe gathers, their leader emerges, powerful and strong, standing victorious.

Bodhran
Our female lead is stirred by a rhythmic force, a brief encounter, she is not wooed and leaves. The powerful beats of the tribal drum transport us back to where it all began. The rhythms are intricate and dynamic, a perfect rivalry to the percussive feet.

Dancing at the Crossroads
A lone musician plays, beckoning all near and far, we gather together any place we can, to play our music and dance.

Journey to Old Ireland (Song)
A medley of classic Irish songs guaranteed to get your feet tapping and hands clapping.

The Gathering (Fireside)
The music takes a slower pace now as we all gather around the fireside, a playful scene like many an old pub, from Jigs to Reels to Polkas, our traditions are celebrated here.

The Emigrants Lament (Song)
The time has come for us to leave Ireland, our journey continues for a place to call home.

The Departing
Some of us must leave behind our loved ones, our home is no more, we search for new lands, but let us not be sad, let us celebrate together.

A New Dawn
The sun rises in a new place, our futures are bright and full of possibilities.

The Irish Overseas
In this scene the male troupe takes us through a variety of different rhythms, from the basic to the most intricate fast footwork, each exhibiting their power and strengths in competition with each other.

Beat of the Bodhran
The male troupe battle through rhythms as the bodhran player tries to seduce our female leader.

Trading tunes
Irish music is deep-rooted in tradition, but as we travel the world, we meet new people along the way and learn from their traditions. Cultures exchanging.

Conflicting Rhythms
Our oldest, native dance style (Sean Nos) is free and simple yet intricate, from this, Irish dance evolved into the militant powerful style we see today. Our Irish cast battle the Sean Nos (meaning ‘old style’) dancer and join forces, old and new, together in harmony.

Billy Taylor (Song)
This old northern song tells the story of a woman who disguises herself as a sailor in order to search for her lost lover.

The Irish in America (Swing Time)
We find our cast in a different setting, the past is behind us and new places have brought a different era, it’s Swing time!

Musicians Farewell
Our band brings you their final performance in the show, highlighting each soloist and bringing the house down with foot-stomping live Irish music.

Home
After all our time spent in foreign places, we must now return home, to celebrate our culture and heritage through music and dance.

Finale
The cast bid farewell to all the new friends we have made throughout the show. 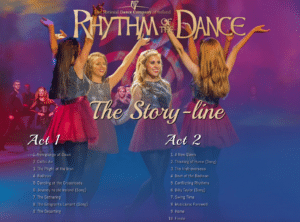