16 strings, 8 dancing feet and 4 voices with 1 aim: to make classical music wickedly funny and fantastically exhilarating for everyone, young and old. Graffiti Classics bursts the setlist boundaries of the traditional String Quartet with its hilarious all-­singing, all-­dancing musical comedy show.

It’s a classical concert, a gypsy­folk romp, an opera, a stand­up comedy set and a brilliant dance show all rolled into one! You will enjoy a broad spectrum of music from Beethoven to Bluegrass, Bach to Brahms, Strauss to Saturday Night Fever, Offenbach to Elvis as well as many well ­loved folk tunes – all played with the Graffiti Classics virtuosity. There really is something for everyone and Graffiti Classics never fails to get audiences laughing, clapping and singing along. Kids and adults alike love the uplifting variety of musical styles, all tied together with cheeky audience interaction.

Graffiti Classics was formed by a group of young graduates from London’s top musical conservatoires, including the Guildhall School of Music and the Royal College of Music, who met whilst street­performing in London’s Covent Garden. They decided that classical music should be made fun and inclusive for everyone through interaction and comedy, creating a unique and world­classjaw­dropping comedy show.

Graffiti Classics has appeared on national TV and radio in the UK, Ireland and Spain, played for Presidents and Royalty, appeared asguest artists with major orchestras, such as the Royal Philarmonic,is a member of Yehudi Menuhin Live Music Now scheme and is also in huge demand as a lead headliner act on the most exclusivecruise­ships in the world, such as Seabourn, Norwegian Cruise Lines, Royal Caribbean Cruises, Saga, Holland America and Celebrity Cruises . The band also collaborated with Thorbjorn Egner on an awarding winning album of Norwegian children’s songs on the Naxos label.

Most recently, Graffiti Classics has appeared on BBC TV’s Hoopla,performed live on BBC Radio, has been profiled on Lyric FM’s Culture File and has headlined at the Babaro International Festival,the New Orleans Mardi Gras, the Spark Festival as well as the London Southbank Centre’s Imagine Festival.

The Stage
‘A delightful comedy string quartet….highbrow music finds fusion with visual comedy for those who choose to smile their way through classical music’
Daily Mail
“A cabaret that will leave you wanting more”
The Times
“A simply wonderful show!”
Western Gazette
“They had the audience falling off their seats with laughter”
Enfield Independent
“Graffiti simply mesmerised the audience”
Nottingham Post
“A terrific quartet…the fab four earned themselves a standing ovation with a scintillating repertoire” 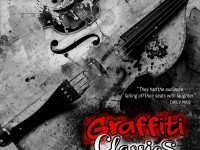 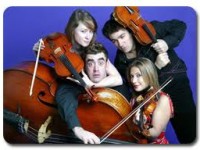 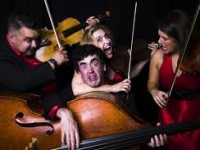 For more information on Graffiti Classics please do not hesitate to contact a member of our Team at Audionetworks.ie , on:+ 353 1 201 3660